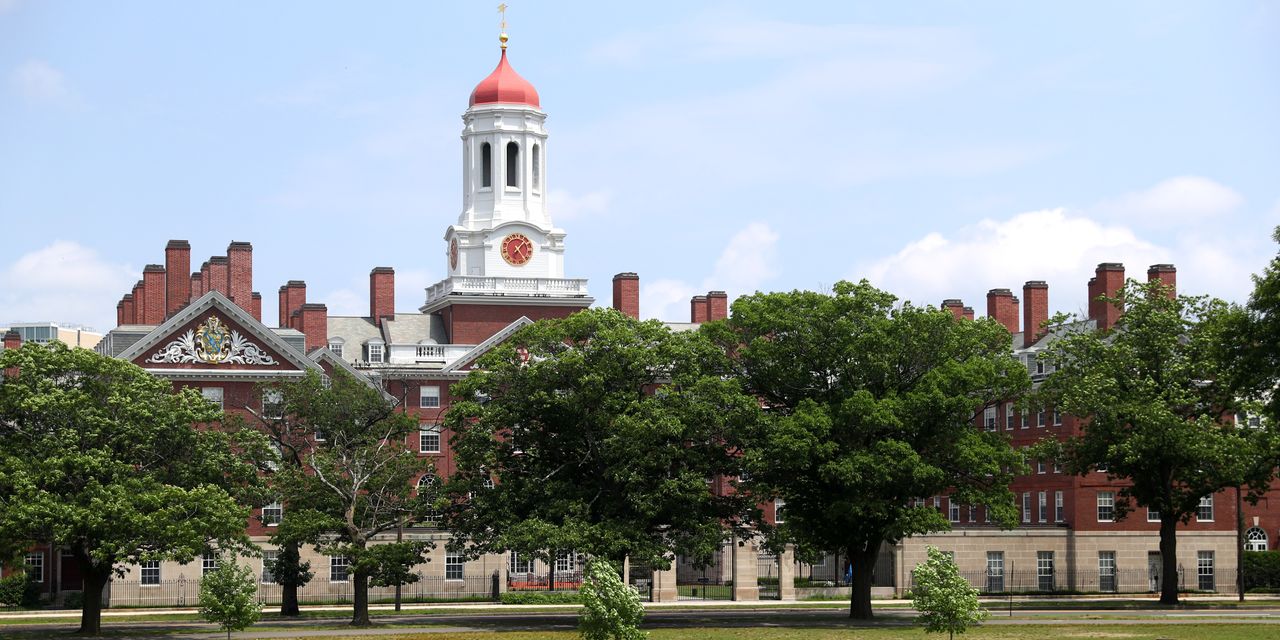 After years of mediocre gains against the S&P 500, university endowments are posting their best returns in decades, thanks to the stock market boom and strong performance from venture and private equity.

College endowments are now delivering stunning investment returns for the fiscal year ended June 30. The Massachusetts Institute of Technology said Thursday its fund gained 55.5%, adding $ 9 billion to the endowment, now valued at $ 27.4 billion. Brown University said it gained 51.5%, bringing the value of its fund to $ 6.9 billion. The public equity portion generated a gain of 58.9% while private equity had a return of 86.8%. Washington University in St. Louis has one of the best returns among schools, at 65%.

Harvard University said Thursday that its $ 53.2 billion fund gained 33.6%, boosted by a 77% return on its private equity portfolio comprising venture capital and a 50% gain in its public actions. The Harvard Fund, America’s largest university endowment, lagged behind its peers due to its more conservative approach.

Endowments have not been helped, however, by heavy weightings in alternatives over the past 10 years, when stocks have had a great run. School funds posted an annualized average of 7.5% over the 10 years through June 30, according to a 2020 study by the National Association of College and University Business Officers and TIAA. The S&P 500 posted an annualized return of 14.8% over the period.

“It’s the rebirth of the endowment model,” says Larry Kochard, former director of investments at the University of Virginia Investment Management Co. who now oversees investments at Makena Capital, which has $ 20 billion in assets. “The endowment model has undergone a lot of setback over the past decade, but it reinforces the fact that you’ll get bigger returns if you’re focused on the long term.”

Since NP â€œNarvâ€ Narvekar took over as Harvard Management Co. in December 2016, he has restructured the organization, including increasing private equity. Harvard had 33% allocated to private equity, up from 20% in fiscal 2019.

â€œUS stocks have done very well, and venture capital has done even better,â€ said Margaret Chen, global head of endowment and foundation practice at investment firm Cambridge Associates. â€œYou can see the outperformance of those who had a higher allocation to private investment for a long time. “

According to preliminary data from Cambridge, endowments for colleges of all sizes gained a median of 33.3% in fiscal 2021. The median return for funds with assets over $ 1 billion was 36 %. Endowments easily topped the S&P 500, which returned 41%, with dividends reinvested.

The 2021 returns took him out of the stadium compared to past performances. The endowments were hammered at the start of the outbreak of the pandemic. They gained 1.8%, on average, in fiscal 2020, according to the study by Nacubo and TIAA. The S&P 500 gained 7.5%, including dividends reinvested, during the period.

Swensen’s widely imitated alternatives-heavy approach was known as the Yale model. Swensen passed away in May and Yale recently appointed Matthew Mendelsohn, who has worked for the foundation since 2007 and headed its venture capital portfolio, to succeed him as chief investment officer.

Northwestern University’s endowment of $ 15 billion increased 42.2% during the year. â€œA lot of things have worked,â€ said Amy Falls, who was appointed the foundation’s chief investment officer in February, in an interview. â€œWe are satisfied with the performance of our equity managers, and venture capital has blown the doors. She said the venture capital portfolio gained 115% during the year.

The Chancellor of Washington University in St. Louis, Andrew D. Martin, said in a statement last month that the 65% endowment return was a “watershed moment for us as an institution” at the time. support for its academic initiatives. The return added more than $ 5 billion to the endowment, now valued at $ 15.3 billion.

Investment director Scott Wilson, who took over the fund in 2017, said in an interview that the global equity portfolio gained 71.5% and that investments in buyouts, venture capital, troubled debt and investment in growth stocks had increased by 82%.

Among Ivy League funds, the University of Pennsylvania’s $ 20.5 billion fund was up 41%. Cornell University’s endowment rose 41.9%, pushing its fund’s value to a record high of $ 10 billion.

Venture capital is on its way to seeing its best returns since the dot-com boom in the late 1990s, the Wall Street Journal reported. Fast-growing companies have attracted investors, especially in technology, where progress accelerated during the pandemic as more people worked remotely. Companies are staying private longer, and initial public offerings are more important than ever.

â€œTechnology touches everything we do in our lives,â€ Chen says. â€œThe development of technology has made giant strides since the pandemic. ”

The last time college endowments saw this kind of comeback was during the dotcom boom of the 1990s, and just before the crisis. The median return on endowments in 1999 was 37.7%, according to Cambridge.

Endowments with more than $ 1 billion in assets had an average venture capital allocation of 15%, according to the 2020 study by Nacubo and TIAA.

This allocation dropped significantly for smaller funds – those managing $ 101-250 million had 6% venture capital. â€œYou can see the potential for outperformance for those who have long had a higher allocation to private investment,â€ said Chen of Cambridge.

Another indication of good results is that schools are also significantly exceeding US endowments, which posted a median of 27.2% for fiscal 2021, before fees, the best performance since 1986, according to data from the Wilshire Trust Universe Comparison. Service. College endowment fund returns are net of fees.

Harvard’s performance has lagged behind other school funds because over the past decade, endowment “has taken less risk than many of our peers and establishing the right level of risk tolerance for it. ‘university in the years to come is an essential stewardship responsibility, â€Narvekar wrote in Harvard’s annual report. report, released Thursday.

â€œGiven the extraordinarily strong performance of the market as a whole over the past year, a significantly higher level of portfolio risk would have significantly increased HMC’s returns,â€ he wrote.

Narvekar, like other endowment fund managers, pointed out that the performance stems from investments made years ago in more illiquid alternatives.

â€œBuilding venture capital portfolios is a multi-year effort for several reasons: the diversification of vintages, a very careful manager selection and the years it takes for these exceptional managers to skillfully invest our capital,â€ Narvekar wrote. “Perhaps unsurprisingly, a very large part of the huge gains of venture capital funds over the past year has been linked to investments made over ten years ago.”

Many school endowment managers have warned of expectations that such a stellar performance will continue every year. â€œAs experienced investors understand, the Harvard endowment will not produce returns of 33.6% each year,â€ Narvekar wrote. “Indeed, there are bound to be negative years, hence the importance of understanding risk tolerance.” The fund gained 7.3% in 2020.

Investment gains over a year like fiscal 2021 “are scarce and markets tend to stabilize over time,” Cornell chief investment officer Kenneth Miranda said in a statement on Thursday.

â€œIt has been an extraordinary year, in part because of a unique constellation of events,â€ said Miranda, who cited the market rebound from pandemic lows, supported by US monetary and fiscal policy. “We have a multi-year, almost infinite time horizon, and that money must be managed over generations of Cornell students, faculty, staff and research goals, through bull markets and bear markets.”