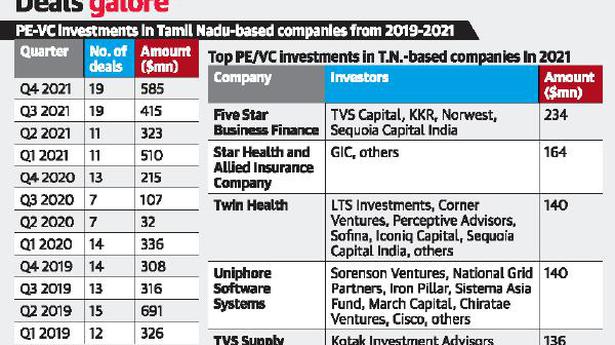 Private equity and venture capital firms invested around $ 1.8 billion in Tamil Nadu-based companies in 60 deals in 2021. Data collected by Venture Intelligence, a research firm focused on Finances, transactions and valuations of private companies, show that in the first quarter of 2021, companies invested $ 510 million in 11 deals and in the second quarter, about $ 323 million was made in 11 deals.

Arun Natarajan, Founder of Venture Intelligence, said: â€œPE-VC’s investments in Tamil Nadu-based companies grew 166% year-on-year in 2021 to over $ 1.8 billion (out of 60 deals) . Chennai fintech startups like M2P Fintech, CredAvenue and GuardianLink have made a strong impression on the radar of Indian and international venture capitalists in 2021, â€said Natarajan.

“The IPO of Unicorn SaaS Freshworks on Nasdaq and the exit of cross-border software start-up Ally (via acquisition by Microsoft) will only put more wind in the sails of corporate tech start-ups state, â€Natarajan said. noted.

Investments by Angel Networks and “Super Angels” in Tamil Nadu-based companies also increased 46% year-on-year to 38 transactions in 2021. The number of such investments saw a steady increase every quarter in 2021, Mr. Natarajan said.

In February, the president of the Mahindra group, Anand Mahindra, had invested in Agnikul.

An overview of Web3’s venture capital activity in 2021