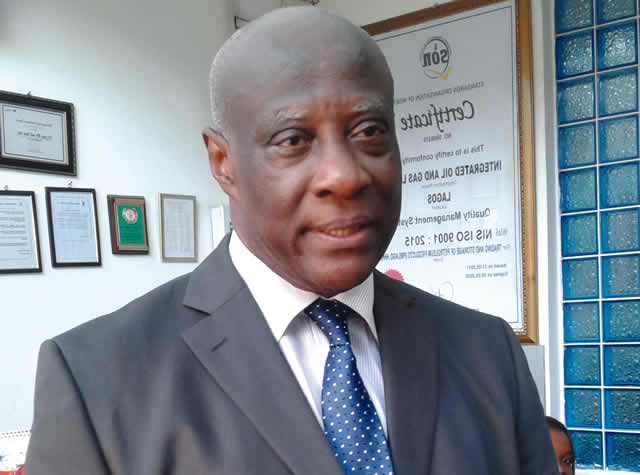 Genesis Worldwide Shipping Managing Director Captain Emmanuel Iheanacho says ANNA OKON on the impact of the modular refinery, a local shipyard and the industrial island the company is building on the Nigerian economy

You are working on a modular refinery, tank farms and a ship, how soon will the projects be completed?

They are in progress. I have been on the projects for three years. It has taken so long because the planning itself takes this time. With the refinery, we have to do a market study, which will take three months and we have to make a proposal, front-end engineering. We did the front and detailed engineering over a year ago. We need a lot of steel to build ships.

With the collapse of most of the steel mills in Nigeria, where do you get the steel from?

We can buy them for now. The ideal situation would have been a local supply of raw materials, as shipping has multiplying advantages. But if we don’t have them, there’s nothing stopping us from importing steel at the moment. But once that demand is established, they build ships in Nigeria and need steel, it will boost investment in existing steel plants.

Have you received funding from the federal government?

I didn’t receive funding because I was busy setting things up. Funding has to come after certain things have been put in place, because you don’t want to go to someone for funding and the person will ask you, what about feasibility studies, approvals? Everything has to be ready and then you go find a consultant who will pack everything.

The financier will want to know if the project is feasible at the start and if the environmental impact study has been carried out. We did it for a whole year. All stakeholders were involved.

Local operators in the maritime sector complain about funding and being at a disadvantage compared to foreign operators, what is preventing local operators from pooling resources and establishing a single shipping line?

I’m not familiar with this thing that you keep talking about gathering the resources. Draw resources for what? If you are a carrier, you have to understand the business to such an extent that you know where you are going to get the money from. You can’t come up with an idea, so you go to another man to ask him to bring his money and join yours in executing that idea. The man might not understand what you are talking about.

So if you know your business then you need to understand where the money is going to come from. The only thing you will like to see is where the government recognizes the critical nature of some of the things you are trying to do and provides some sort of guarantee that can get you the funding you need. When the government vouches, financial institutions will have the confidence to lend money to the investor.

In our case, the Americans stepped in and gave us a grant of $ 1 million when they saw the work that we had done. So people have to do their part and that will convince investors to part with their money. Ultimately, we are talking about developing our economy, so we don’t have to wait for people to come and do it for us.

We do, but not everyone has the same excuse and the same experience. You can’t tell someone who doesn’t have the same development plans in that particular industry to go get the money, no; he must have some basic understanding, training and experience.

The main thing is that if you don’t know, you need to know a man who can do it and how much it will cost you. Then you can go to the banks and tell them stories and make sure they listen to you. Banks will send their risk specialists to ask you questions and based on your answers, they’ll say they know what they’re doing. You have to give him the money.

In other African countries like the Republic of Benin, the port and maritime system is very well developed, what are they doing different from Nigeria?

It depends on what you are referring to. There cannot be a general feeling that they are better developed. Are they building ships there? Are there refineries there? Is there strategic storage there? I know some Nigerians have tanks there.

They have a much smaller economy and the economy is not as complex as ours; so it’s easy to see these things working. If you put it relative to the size of our economy of 197 million people and talk about a place that is smaller than the population of Lagos, it’s easy to look at it and say you don’t perform as well. what they do.

You were one of those who defended the creation of the national carrier in the past. Some say that the Nigerian shipowners did not come forward to ask for permission to obtain the status and that is why no Nigerian shipowner has obtained it. Why is this so?

I didn’t know it was the truth. You know I’m still the managing director of Genesis Worldwide Shipping, which was a national carrier. Back then, the rule was that if you own a 5,000 tonne vessel, you can become a national carrier. But we had more than that. We had a fleet of about seven ships and we were the largest private ship owners at one point.

Even now that we don’t really operate a large fleet, we still have the in-house skills to operate vessels internationally. We regularly operate ships to India. Not everyone can do it because you have to be able to project resources if the ship goes to India; project resources onto the island and be able to monitor the ship on a daily basis; take into account the different time zones; and when they talk to you, you understand what’s going on.

We have moved from managing ships to trading in oil. It was viable, you can’t do everything at the same time and resources are limited so you have to choose.

What stage are you currently at regarding the dry dock?

I haven’t moved on the dry dock yet. I focused on the oil refinery and the industrial area. We are working on strategic storage, which Nigeria has always wanted, so that we can have around 14 days of storage. For example, the last time we had a fuel shortage. If there is strategic storage, Nigeria can fall back on it and stock up for 14 days.

How much do you plan to invest in the project?

The sum of the various projects – the refinery, strategic storage and the island – will be approximately $ 450 million in total.

I can’t tell you how much it’s going to cost me now because I haven’t even built the slipway. But in my experience, when I specified it and wanted to go build it in China, it would have cost me around $ 10-12 million. It’s a big barge, a small self-propelled boat. It’s one of the types of ships we’re going to build here, but not necessarily the only one. We should be able to build ships up to 10,000 tonnes, offshore ships, tankers and the like. But at least what it will do is bring Nigeria into the league of shipbuilding nations.

Did you take into account the shallow depth of Nigerian waters in your decision to build a flat-bottomed vessel?

Why did you think of going to China in the first place?

It is the cheapest place to build a ship.

If you consider the cost of building there and building here, will there be a difference?

There is bound to be a difference because we will be a new shipbuilding nation and we will not be as efficient as these people.

What are the by-products that will come from the refinery you are building and how many are we going to see?

We are building a 20,000 barrels per day refinery. It could be a refinery that produces Premium Motor Spirit in addition to other products. But we are going to do it step by step in order to build what is called a topping plant, which is a refinery that may not produce PMS at first.

There are two reasons why we want to do this. One is the cost, as we have looked at the location factors and the logistics of transporting the crude. It could cost us around $ 116 million to build the topping plant that doesn’t produce PMS.

But if we did decide to include a platformer, a reformer and other things that will now allow us to produce PMS, two things will happen, the price will double, and the project will now be deliverable at around $ 240 million; again, the duration of the project will lengthen.

So that we can complete it, we will then consider three years or a little more than three years. Whereas if we stopped with the topping plant, we could do it in two or three months; that’s why we decided to do the pollarding plant first.

This is called a modular refinery. This means that you can add modules to it and remove them whenever you want. If we do like that and everything goes well, at some point we will go beyond it and add a module that will allow us to start producing PMS. I think in terms of risk, it reduces the elements of risk inherent in the business.

Copyright PUNCH.
All rights reserved. This material and any other digital content on this website may not be reproduced, published, broadcast, rewritten or redistributed in whole or in part without the express prior written permission of PUNCH.