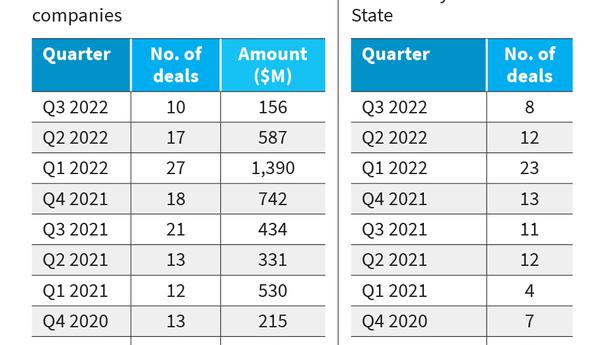 The number and size of deals decreased from the previous quarter, when the state secured $587 million in 17 deals.

The number and size of deals decreased from the previous quarter, when the state secured $587 million in 17 deals.

Private equity and venture capital firms invested $156 million in 10 deals in Tamil Nadu-based companies in the third quarter of 2022.

The number of transactions and the amount of investments decreased compared to the corresponding quarter of last year. In the third quarter of 2021, $434 million was invested in 21 deals, according to data provided by Venture Intelligence, a research service focused on the finances, deals and valuations of private companies.

The figures include venture capital type investments, but exclude private equity investments in real estate. Deals and the amount of investments were down from the previous quarter when the state secured $587 million from 17 deals.

This quarter, the largest investment was made in LifeWell Diagnostics, which secured $80 million from OrbiMed, a global healthcare-focused investment firm. Other companies that secured investments during the quarter were Detect Tech ($25 million), Wheelocity ($12 million), and M2P Fintech ($4 million).

The number of angel investments in Tamil Nadu-based companies also declined this quarter. It stands at 8 against 11 during the same quarter of 2021.

Even domestically, private equity and venture capital deals and investments fell this quarter. These firms invested $6.3 billion in 258 Indian business deals in the quarter ended September 2022, down 71% from the same period in 2021 when $21.7 billion was invested. invested in 414 transactions.

“Given global macroeconomic developments and continued volatility in public markets, the decline in private enterprise investment numbers, from the highs of 2021, was to be expected,” said Arun Natarajan, founder of Venture Intelligence.

“What is encouraging, however, is the fact that we expect to end the year with higher investment figures than any other year except the now clearly abnormal 2021. tech companies that have dominated the past two years,” he added.