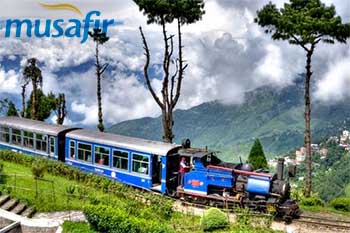 Musafir.com, the UAE’s premier online travel agency (OTA) and a leading player in the Indian OTA category, has announced the appointment of Rajesh pareek as the new CEO of the Group, as the Company prepares for its first major round of corporate finance. Rajesh joins the Company from Dubai International Financial Center (DIFC), where he served as CFO from January 2011 to December 2016. In his new role, Rajesh will lead Musafir.com with a focus on international expansion and the next round of fundraising activities for the company.

Over the past three years, the Company has seen compound annual growth rate (CAGR) of around 40% for all activity, with online activity increasing to over 150% of CAGR. Meanwhile, Musafir.com has also quadrupled the number of employees from 100 to over 400.

In November 2016, Musafir.com announced the launch of dedicated operations and Arab websites in Saudi Arabia and Qatar, with further expansion planned in India, GCC and MENA regions in the short and middle term.

â€œMusafir.com is a company founded on an ambitious vision and we are delighted to welcome Rajesh as CEO of the group,â€ commented Sheikh Mohammed bin Abdullah Al Thani, president and co-founder of Musafir.com. â€œIn Rajesh, we have found someone who shares our vision and we look forward to their contribution to achieving the next phase of growth for Musafir.com. Rajesh will be instrumental in strengthening our business model, raising capital and exploring new mergers and acquisitions. “

â€œRajesh brings rich experience to the company, which will benefit both our employees, customers and partners,â€ added Sachin Gadoya, co-founder and CEO of Musafir.com. â€œRajesh’s key priority will be to ensure the company delivers business results and ultimately establish Musafir.com as the number one OTA in the MENA region. “

While at DIFC, Rajesh oversaw the financial performance of the DIFC Authority and its related companies, including DIFC Investments LLC (DIFCI). He led the $ 1.25 billion DIFCI Sukuk refinancing in 2012. In 2014, he led the $ 700 million DIFCI award-winning investment grade Sukuk issue. Rajesh received the Middle East CFO of the Year award for his accomplishments in 2015.

â€œOperating under a unique hybrid business model that combines online and offline services, Musafir.com has grown steadily over the past decade and has established itself as a beacon of excellence for the travel industry. of the region, â€Rajesh said. â€œFor the future, we have a very ambitious growth plan and I am delighted to join the Company at such an important stage in its journey. I can’t wait to play my part in establishing Musafir.com as number one OTA in the MENA region and one of the fastest growing OTAs in India, consolidating its place as an industry leader in innovation.

Use Your Salary to Achieve Your Investment Goals | New times