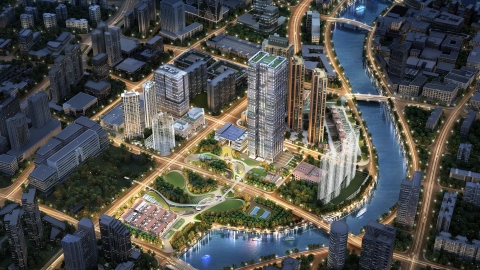 Shanghai Technology Venture Capital (Group) Co, commonly known as STVC, is a leading investment and finance platform that supports innovation and entrepreneurship in the city, as well as the transformation and upgrading of strategic emerging companies.

STVC recently started construction of its new seven-story headquarters at 273 Tongren Road. When completed, it will have a total area of â€‹â€‹over 7,000 square meters.

According to the district government, this is only the beginning of cooperation between the two organizations.

The district government went on to describe a series of large projects that began construction in Jing’an in the third quarter of the year, such as the Baofengyuan Residential Complex and the Suhe Bay Greenery Park Project.

Suhe Bay Greenery will create a local version of Central Park in New York City. Covering nearly 70,000 square meters, it will include forests and streams. In addition, it will display the traditional Shanghai lillong and the local culture Mazu (the goddess of the sea).