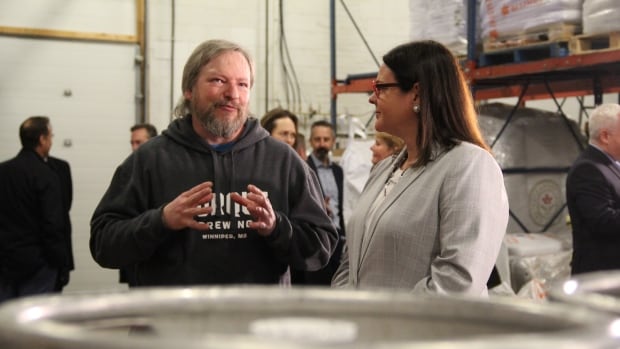 The Manitoba government is trying to help businesses grow and is spending $50 million to do so.

It is using the money to create a venture capital fund that will be matched with private capital to boost Manitoba-focused investment funds, the province said in a news release.

The intention to create a VCF was announced last year, but now the process is underway with the money to be made available later this year.

“This fund will lead to the creation of new, entrepreneur-led businesses…and fuel province-wide economic growth to support Manitoba’s rural, urban and northern economies,” Premier Heather Stefanson said during her remarks. a press conference at Torque Brewing in Winnipeg.

“Manitoba’s business leaders are the engine of our economy, creators of jobs and prosperity. They told us that access to capital is essential to the development and expansion of Manitoba businesses.

the Manitoba Technology Accelerator will ensure the interim management of the funds intended for the venture capital fund.

The MTA will create a steering committee comprised of industry, community and provincial government representatives to establish the initial governance structure, Stefanson said.

“The plan announced today…is ambitious and not intended to bring a single fund to Manitoba, but the approach is to leverage this capital to grow a community of venture capital funds in our province,” said Marshall Ring, CEO of MTA.

“This approach will allow Manitoba to grow new businesses faster and more successfully and help our entrepreneurs build the future of Manitoba’s economy.”

Moreover, the Venture capital tax credit for small businesseswhich is due to expire later this year, becomes permanent, Stefanson said.

It provides a non-refundable Manitoba tax credit of up to 45% to individuals and corporations who acquire equity in qualifying Manitoba businesses.

It was thanks to this tax credit that the founders of Torque Brewing were able to start their business, said co-owner Adam Olson.

“Anyone who decided to invest in us was able to take advantage of this credit and get back 45% of their investment, which is important for people investing in a start-up business because you never know what’s going to happen. “, he said.

“They blindly trust us that we’re going to be able to do it. And in return, the government gives them some credit to allow them to do it and provide us with the money. That money was very important.”

Brewing is a very expensive business and having the ability to access more venture capital tax credit and now venture capital will allow Torque to expand into markets outside of Manitoba, Olson said. .