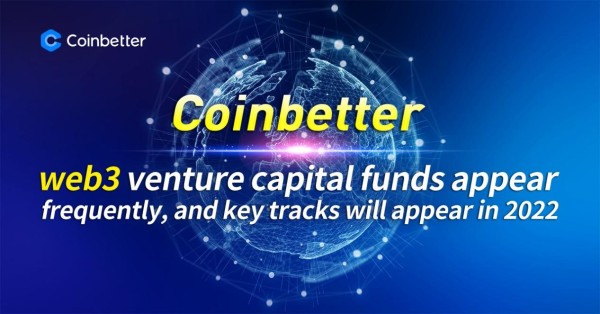 In 2021, Web3 has become a buzzword in technology, crypto and venture capital.

Coinbetter found that after entering 2022, the amount of Web3 funds launched by venture capital institutions exceeded 100 million US dollars. Among them, there are many well-known investment institutions including DCG and so on.

These are just a handful of the investment world in 2022.

Data from DeepDAO.io, a data analytics platform, shows that in 2022, the web asset management scale 3 of 216 top DAOs reached $9.5 billion.

The scale of these huge investments is a microcosm of global venture capital interest in Web3. It is predictable that with the popularity of Web3 around the world, more and more institutions will join these ranks.

The Mystery of the Web 3

What exactly is web3? It must also start from web1 and web2.

The concept of web2 was proposed by initiator Tim O’Reilly at the O’Reilly Media Web2.0 conference in 2004. He believes that web2, as a new model for building the Internet, is innovative in that that the content is “read-only”. becomes “interactive”, users can not only receive content, but also create content, is a network environment that emphasizes user-generated content. The representative products of this period are blogs, RSS and social networks.

Around 2016, blockchain technology swept the internet and the concept of web3 underwent huge changes. The Web3 paradigm is user-created, user-owned, user-controlled, and protocol-distributed. Therefore, web3 is also known as the Internet of Value. In the words of Reuters-linked reports, web3 is a decentralized internet based on blockchain technology.

If web2 is an upgrade iteration of web1, then web3 is more like a “revolution” of web2. Josh Stark, one of the main contributors of Ethereum technology, believes that web3 is a set of technologies aimed at rebuilding control of the Internet, and web3 is the rebellion of traditional Internet users against the current Internet world, representing the idealistic pursuit of the Internet by geeks.

Upgrading from web1 to web2 did not solve the centralization problem. On the contrary, with the online transmission of a large amount of information and data, the problem of centralization has become increasingly important.

Blockchain’s characteristics of decentralization, lack of trust and inviolability provide Web3 advocates with weapons to realize the vision of Web3, so that Web3 has the opportunity to fundamentally change the traditional power structure of the Internet world. in principle.

Coinbetter’s Deep Thoughts on the Web 3

At present, the general framework of the Web3 world has been basically formed.

Coinbetter believes that the core blockchain infrastructure of web3 is complete and a series of well-known public chains such as Ethereum, Solana, Polygon, and Avalanche have emerged. Subsequently, basic technical components such as inter-chain bridges, decentralized protocols such as storage, computing and networking also appeared one after another.

From the application scenarios of web3, it can be roughly categorized into Defi Category, NFT Category, Game Category (including GameFi and Metaverse) and Content/Social Category.

It can be said that DeFi is the first application scenario of the Web3 landing. DeFi provides users with a series of financial tools, including Exchange, Payment, Credit/Lending, Derivatives, Asset Management, etc. According to relevant data from Defi Llama, in March, the total locked volume of DeFi reached $113.73 billion.

The popularity of NFT is far higher than that of Web3, and the transaction volume of NFT applications in collectibles, art, games and other fields is far ahead. Relevant data shows that the total trading volume of NFT in 2021 will reach 19.6 billion US dollars.

As for GameFi and the Metaverse, the hype in 2021 is still fresh in my mind. With the continuous advancement of web3, it is predictable that more and more web3 landing scenarios will appear.

Judging from the current information, some exchanges have already carried out a drastic exploration. For example, FTX will work on the expansion of Web3 in Africa.

Naturally, as an old-school exchange with a keen sense of smell, Coinbetter has also found that the application space and development potential of web3 is very large. With the support of the development plan, Coinbetter will strive to build key infrastructure, such as cross-chain bridges, to meet users’ needs to transfer funds across major ecosystems; creating ways for global users to participate in and understand the Web3 economy, including providing opportunities for the exchange of educational resources and a popular science conference room; actively listed related tokens, users can easily use Coinbetter to trade related Web3 tokens.

As an important part, Coinbetter will also allocate funds from the $5 million fund to establish a special investment fund to provide excellent and potential Web3 projects with various services to accelerate their growth. Going forward, the market will see more Coinbetter crawls on Web3.

Although web3 is still at an early stage of development and faces many problems and challenges, and the public is much less aware of it than web2, Coinbetter firmly believes that web3 can bring changes that affect social relationships and the real value of the company. Therefore, the exploration of web3 will continue.

Web3 is imperative and unstoppable.

If you have any ideas and questions about the three sectors of NFT/Gamefi, DAO and Web3.0, please contact us. Coinbetter Market Brand Cooperation Email: [email protected]looking forward to communicating with you.